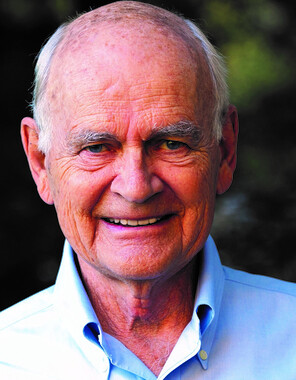 Back to Paul's story

Paul David Martino, of Weatherford, died Saturday, December 7, 2019 at Martin Crest Assisted Living surrounded by his three children. He was 87.
A memorial service will be held at 3 p.m. Thursday, December 12, 2019 at Grace First Presbyterian Church, 606 Mockingbird Lane, with a private interment in Dallas's Greenwood Cemetery.
In lieu of flowers, please make donations to the Grace-First Presbyterian Church Building Maintenance Fund.
He was born in Dallas September 12, 1932, to James Frank and Edla Nilson Martino, the youngest of their three sons.
While an adolescent, Paul was active in the Boy Scouts of America, achieving the rank of Eagle Scout. He also participated in ROTC and lettered in track before graduating from Woodrow Wilson High School in Dallas.
Paul then entered the University of Texas to pursue a degree in ceramic engineering. While there he was active in Sigma Phi Epsilon social fraternity, Alpha Phi Omega service fraternity and the student branch of the American Ceramic Society. He became a member of the "T" Association for his service as senior intramural manager.
At UT, he met fellow Longhorn Kaye Love Clark of Weslaco; the couple married on September 4, 1953, in San Benito.
When Paul accepted a job in the research division of Can-Tex Industries, he and Kaye moved to Tell City, Ind., where their three children were born.
The family moved back to Paul and Kaye's beloved Texas in 1964 when his employer opened a new research facility in Weatherford.
Paul has resided in Weatherford since then, except for four years when he worked for Acme Brick in Malvern, Ark. He and Kaye returned to Weatherford in 1987 when he took a position with US Brick in Mineral Wells.
Paul contributed greatly to his profession. He authored and published numerous technical papers and holds six US and foreign patents. In 1990, the American Ceramic Society named him as a Fellow, in recognition of his contribution to ceramic arts and sciences.
Paul was an active member in each of the communities in which he resided. Shortly after moving to Weatherford, he registered with Boy Scout Troop 76 and eventually served as scoutmaster for 10 years, producing 34 Eagle Scouts during that time. For his service beyond the troop level, Paul received the District Award of Merit, and in 1973, the Longhorn Council honored Paul with the Silver Beaver Award.
Paul was also very active in Grace First Presbyterian Church, serving as elder and deacon and on various committees.
Paul enjoyed traveling, maintaining a beautiful yard, and woodworking. He will be remembered by many for his playful teasing and jovial spirit.
Above all, Paul was devoted to his family, encouraging each member in their varied educational and personal pursuits. He and Kaye spent 66 years together before she passed in May, and they loved spending time with their children and grandchildren.
In addition to Kaye, Paul is preceded in death by his parents and his brothers and their wives, Karl, Kathy, Frank and Betty Martino.
Survivors include daughters and sons-in-law, Beth Lynn and Paul Dishman of Provo, Utah, and Sylvia and Joe Bierschenk of Nacogdoches; son and daughter-in-law, David and Lauri Martino of Austin; as well as sisters-in-law and their husbands, Sue and Marshall Wortham of Wimberley; Mary and John Polk of Gruene; and Minta McIntosh of Georgetown. Paul is also survived by grandchildren, Lake Dishman and wife, Elysa, of Provo Utah, Mike Bierschenk and husband, Jarod Wilson, of Columbus, Ohio, Deya Justice and husband, David, of Bellevue, Wash., Elisa Bierschenk and husband, Rob Oler, of San Antonio, Matthew Bierschenk and wife, Allison, of Austin, Hannah Bowers and husband, Joel, of Fort Worth, Maggie Martino of Austin, and Emma Kress and husband, Luke, of Austin. His five great-grandchildren include Jonah and Emelyn Dishman, Will Justice and Olivia and Henry Bowers.
Published on December 9, 2019
To plant a tree in memory of Paul David Martino, please visit Tribute Store.

Plant a tree in memory
of Paul

A place to share condolences and memories.
The guestbook expires on March 08, 2020.

Mia McElroy
I am so very sorry for your loss. He was a very special man and will be missed greatly. I will always fondly remember his tender goodbye to Kaye when she was passing and his telling her to wait for him. Now they are together again and at peace. Much love and hugs to you all.
Amber Smith
This breaks my heart you were so sweet and caring I'm glad you get to be with your wife again 😪
View all