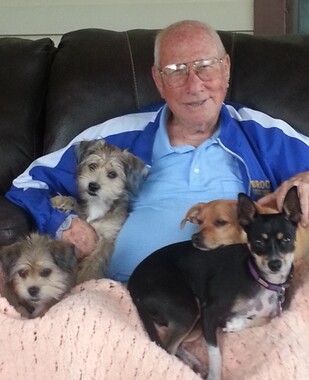 Back to Kenneth's story

Kenneth Lange Wilson, 85, of Weatherford went to be with the Lord on January 12, 2020.
A memorial service will be held on Sunday, January 19th at Galbreaith Pickard Funeral Chapel beginning at 2:00 pm.
Kenneth was born on June 23, 1934 in Fort Worth, Texas to the late Robert Cullen Wilson Sr. and Jenny Florence Gordon Wilson. He joined the US Marine Corps in 1952. February 7, 1953, Kenneth married the love of his life, Shirley Horn. Together they had three daughters, Linda, Kimberley and Tami. Captain Kenneth had a 12 year service shooting career which included 8 Armed Forces Skeet Championships and continued until his retirement in 1972. He also won 5 World Championships in individual and team events. Ken was the 1964 Marine Corps 12GA Champion and the 1972 Armed Forces 20GA Champion. In 2000 Captain Kenneth L. Wilson, United States Marine Corps, Retired, was inducted into the Armed Forces Skeet Association Hall of Fame. After retiring, he began working in real estate before becoming a substitute teacher at Weatherford Highschool. In his free time, he enjoyed playing chess, shooting pool, playing dominos, playing 18 holes or giving people a run for their money while playing poker.
Kenneth is preceded in death by his wife of 57 years, Shirley; parents, Robert Cullen Wilson Sr. and Jenny Florence Gordon Wilson; daughter, Linda Cox; and brothers, Robert Cullen Wilson Jr. and Jimmy L. Wilson Sr.
Survivors include his daughters, Kimberley Dinsmore (David) and Tami Williams (David Routte); grandchildren, Laurie Gee (Rory), Candace Blumhorst (Bo), Michael Dinsmore (Kami), Christine Gillison; nine great-grandchildren; one great great-grandchild; and a host of nieces, nephews and friends.
Published on January 16, 2020
To plant a tree in memory of Kenneth Lange Wilson, please visit Tribute Store.

Plant a tree in memory
of Kenneth

A place to share condolences and memories.
The guestbook expires on April 12, 2020.