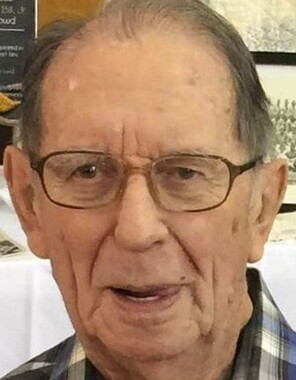 Back to Billie's story

Billie Barrett Baldwin, Jr., 92, of Weatherford, passed away Sunday evening, March 22, 2020, in Weatherford. A graveside committal service will be held at 11 A.M., Wednesday, March 25, at Clark Cemetery north of Weatherford for his immediate family.
Billie was born February 14, 1928, in Maysville, Kentucky to William and Jessie Baldwin. He proudly served his country during the Korean Conflict. Billie married Mamie Louise Hardin on February 12, 1951, in Weatherford. He worked for many years as a passenger agent with American Airlines prior to his retirement in 1983. Billie enjoyed spending time with his family, his church - Friendship Baptist in Weatherford, Kentucky basketball, and keeping his yard beautiful. An amazing musician, Billie enjoyed Blue Grass Music and playing his guitar and mandolin.
Billie is survived by his of wife of 68 years, Mamie Louise Baldwin; his three sons, Barry and wife Betty, Randy and wife Amy, and Russell Baldwin; grandchildren, Brandon and wife Shayla, Bethany Tarpley and husband Chris, Travis and wife Brittany, and Will Baldwin; great-grandchildren, Macy, Addie, and Blake Tarpley, Seth and Ava Baldwin; and by numerous nieces, nephews, and friends.
In addition to his parents, Billie was preceded in death by his granddaughter, Madeline Baldwin. In lieu of flowers, memorials may be sent to the Friendship Baptist Church Food Bank.
Published on March 24, 2020
To send flowers to the family of Billie Baldwin, please visit Tribute Store.

Send flowers
in memory of Billie

A place to share condolences and memories.
The guestbook expires on June 22, 2020.

Harvey Tate
I used to walk by his home and one day he said hi and after that we became friends. I am so sorry to hear of his passing. Prayers to the family
MICKEY CAFARO
I FIRST MET BILLIE IN 1972 WHEN I CAME TO LOVE FIELD TO LOOK THE AREA OVER.BILLIE WAS WORKING IN THE BAGGAGE SERVICE OFFICE AND I WAS SHOCKED TO SEE HIM WEARING BLACK COWBOY BOOTS.WE NORTHERN FOLKS DIDN'T DO THAT.HE WAS ALWAYS CORDIAL AND SUPER NICE MAN.REST IN PEACE BILLIE
Sue Hauf
Billie was one of my favorite bluegrass people. His sense of humor and ready smile brightened up every jam session. I know he is now jamming with all that have gone before, including my folks (Erv and Dolly.) I pray peace and strength on all who loved him.
View all